The island was populated from 1887 to 1974 as a coal mining facility. The island’s most notable features are the abandoned and undisturbed concrete apartment buildings and the surrounding sea wall. It is known for its coal mines and their operation during the industrialization of Japan. Mitsubishi bought the island in 1890 and began the project, the aim of which was extracting coal from undersea mines. They built Japan’s first large concrete building (To protect from Typhoons it was 9 stories high). In 1959, the 6.3-hectare island’s population reached its peak of 5,259, with a population density of 835 people per hectare (83,500 people/km2, 216,264 people per square mile) for the whole island.

As petroleum replaced coal in Japan in the 1960s, coal mines began shutting down all over the country, and Hashima’s mines were no exception. Mitsubishi officially announced the closing of the mine in 1974, and today it is empty and bare, which is why it is called Ghost Island.

A small portion of the island was re-opened for tourism on April 22, 2009 after 35 years of closure.

While watching James Bond film Skyfall(2012), I was kind of impressed with few scenes which were shot at some uninhabited island. Then after browsing, I got to know that it was shot at this Island. Thought this is worth sharing.

Interesting fact is that this Island served as an inspiration to the movie makers, Even filming of Skyfall did not took place on this Island it seems.

Fugu is otherwise known as blowfish or puffer fish.The humble puffer fish may look cute,but that’s before you find out that it contains a poison with the power to both paralyse and suffocate.Some consider the liver the tastiest part but it is also the most poisonous.When prepared properly by having its liver and reproductive organs removed, the Fugu is something of a Japanese delicacy.

Fugu is served as sashimi and chirinabe.However, should the chef slip up, munching on the puffer fish could lead to the ingestion of the poison tetrodotoxin, and ultimately a slow and painful death.While there is no antidote, victims can survive if they are given respiratory assistance until the poison wears off. With this in mind, people planning to indulge in some Fugu will want to ensure a licensed chef prepares the fish for them.Fugu has become one of the most celebrated and notorious dishes in Japanese cuisine.I am planning to indulge in eating it & I hope it will happen soon(without being poisoned)..;) 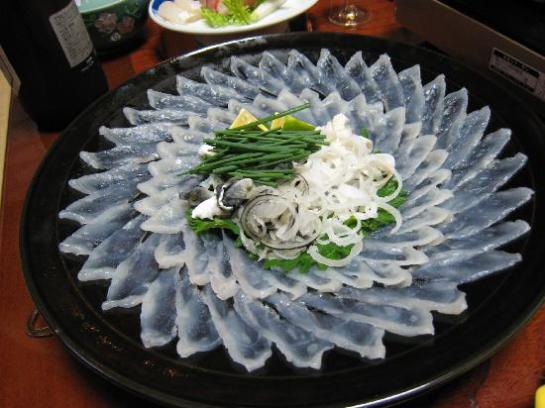 The restaurant preparation of fugu is strictly controlled by law in Japan and several other countries,and only chefs who have qualified through rigorous training are allowed to deal with the fish.This involves a two- or three-year apprenticeship.The licensing examination process consists of a written test, a fish-identification test, and a practical test, preparing and eating it himself.Only about 35 percent of the applicants pass.Small miscalculations result in failure or, in rare cases, death.Consumers believe that this training process makes it safer to eat fugu in restaurants or markets.Alternatively, those desperate to taste the delicacy could choose a non-toxic form of Fugu, which has been bred by a number of Japanese producers.